As a sexuality education and feminist ethicist, I am often asked why I spend so much time talking about girls empowerment.  First, I think that is a false statement.  When parents, students, Christian educators, and so on hear me talking about gender equity, they often assume it is only about “girls”.  In fact, gender equity is about everyone both being unique and valued for how they live out their gender as well as not discriminating against any one gender over and against another.

The other day, while researching for a completely different topic, I came across feminist theologian, Joyce Ann Mercer’s blog, Boy Power? which seeks to answer this same inquiry. She concludes by saying:

There is some good work on adolescent boys out there. The good stuff focuses both positively and critically on boys’ gendered experiences amid changing social realities. And then there is some writing that I call “backlash boy literature.” The backlash stuff whines about how everyone has been paying too much attention to girls lately, asserting that boys are the real victims/marginal ones in contested gender spaces. What’s clear to me is that attention to how gender shapes the lives of teens is important for both girls and boys, and is a good focus for feminist theological reflection.

Asking how gender shapes the lives of our children is extremely important.  Yet, the mistake gender-inclusive parents (myself included) often make is to approach gender as though it shouldn’t matter.  In an essay for the Journal of Feminist Studies in Religion on Mothering Sons (27.2, 2001) I wrote about just such an experience:

Bronwyn Davies, through an in-depth study of preschool children, found that adult caregivers were missing a crucial link between sex and gender in their attempts to move children to “gender-neutral” play and identity.  She writes, 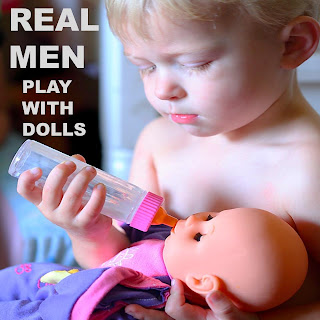 Adults interested in liberating children from oppressive sex roles are generally not questioning maleness and femaleness as such.  They are simply rejecting the negative side of femininity for girls . . . .and the negative side of masculinity for boys . . . . What we have failed to realise in wondering why it is that children so enthusiastically take up these ways of being so is that these qualities themselves are key signifiers of dualistic maleness and femaleness.  Children cannot both be required to position themselves as identifiably male or female and at the same time be deprived of the means of signifying maleness and femaleness, [sic] [1]

In other words, we ask children to be and play across gender lines while constantly reinforcing their sex as girl/boy.  Girl/boy has no meaning for the children when gendered behaviors are removed and disrupted, given the wider society defines them as one in the same.  When my son was three, he was crushed when a girl in daycare told him his favorite color could not be pink.  He was not equipped to respond and in fact had no other models of boys or males who claimed pink as a favorite color. Children who play and identify on a continuum of gender must be given the tools to negotiate not just gender, but gender’s connection to sex.  The connection is certainly illusive and not determinative, but it exists starkly for younger children in particular. [2]  It is easier to pretend the categories don’t matter or are infinitely mutable, than to do the arduous work of resourcing our children in their sex/gender identity formation.

While I do believe gender is a social construction, there are links that yet undefined between gender and sex identity that cannot be easily dismissed.  In fact, I find many of those links quite prominent in younger children.  The question is:  Can we equip our children to both negotiate the devastating social effects of not complying with gender norms as well as invite them to be who God-created-them-to-be even when their gender identification seems so stereotypically connected to their sex or radically divergent from it?  Gender-inclusive parenting means we also have to evaluate ourselves and be willing to tangle with the mess of how gender influences our lives and thus our parenting.  It isn’t really girls or boys who need attention, it’s our ideas about what being a boy or girl should mean that needs thoughtful rethinking.

Why should Christians be concerned about privacy in a digital world?

Digital privacy might be an oxymoron like jumbo shrimp or fine mess. I had the privilege of joining host Roy Jenkins on BBC Radio Wales, All Things Considered to discuss issues of data privacy and Read more…

This blog was previously published on the Drew Social Justice Leadership Project blog space. As another academic year comes to a close, many of us in academia are attending graduations. Routinely the dean, president, or honored Read more…

What do Good Friday, Teens, and Dating have in Common?

Most of us do not connect discussions of teen dating with Sunday School discussions about Good Friday. There may be some theological traditions who would use Jesus’ sacrifice on the cross to bring a bit Read more…